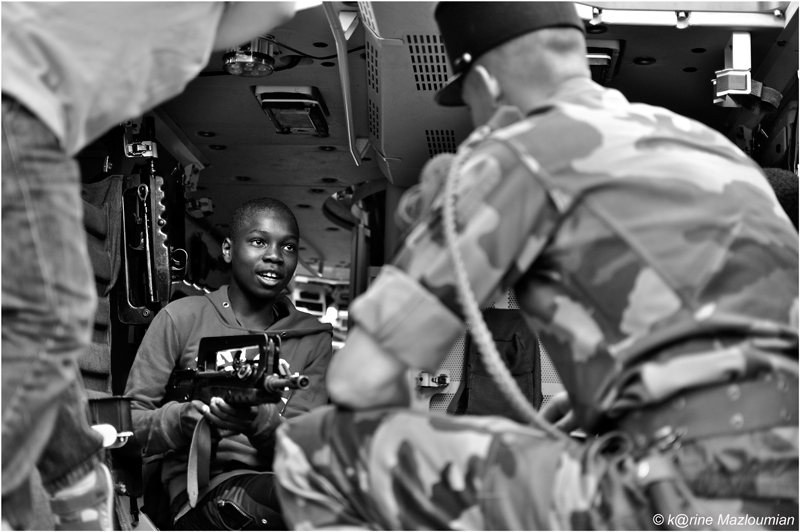 Previous Next
← previous day next day →

Posted by Karine*Mazloumian (Paris, France) on 21 July 2015 in People & Portrait and Portfolio.

Shot inside the army tank : in 2012 for the Bastille Day (french national day). With the 92th Infantry Regiment

@Phil David Morris: Big thanks for your so supportive words, Phil, miss your page.

@Ralph Jones: I appreciate your words, thanks Ralph.

Several times I looked at these photos today.
It was hard for me to put comment ...

@omid: For me too, be sure. I posted the previous one, then this one, with no comment, on purpose : I was so disturbed the soldlier put the arm in the kid's hand for a second only. I clicked instinctively, I was so close and passed by maybe 2 minutes. Parents seem so happy to let their kids "play" in such awful sets.................. Thanks O*

Thanks a lot, dear Karine for your explanations!

@omid: Thanks to you for your heart*

Military exploits in far away lands dance inside his head. You can see them in his eyes. Another of those magical captures that you are so expert in achieving, Karine.

@Steve Rice: I'm not sure he really knows what those 'exploits' do mean. I can relate so much to Doug's comment below. Thx*

A fascinatingly disquieting image Karine, I find myself being drawn into what's happening and the message it sends. I note it would have been Woody Guthrie's 100th birthday on Sunday and a friend of mine quoted him saying:
"I would like to see every single soldier on every single side, just take off your helmet, unbuckle your kit, lay down your rifle, and set down at the side of some shady lane, and say, nope, I aint gonna kill nobody. Plenty of rich folks wants to fight. Give them the guns."
My Father served, I served and my Son also served in the armed forces, but today and especially after spending all the time my Son was out in the desert involved in a conflict that seemed more about maintaining the status quo of the wealthy, worrying if he was ok. I truly wonder who we fight wars for, politicians, arms manufacturers, rich people, certainly not ordinary people like you or I.
I love an image that makes me think and this is no doubt a class above, superb.

@Doug: Be thanked, dear Doug - a real comment, heart-felt and for which you took the time : this is a present for me. Especially since you share personal thoughts & feelings I can easily relate to. Thanks again, you made my day* And now this here is for you.

Like so many of the other comments I have seen before me, I didn't know what to think of the image when I first saw it, which was yesterday. How do you manage to keep some of your images up for more than a day? I didn't know what to think of the smile on the boy's face as he pointed the gun at the man in uniform. But this photo is only a "blink" of a moment, which could have involved so much more as far as conversation between the two. A great PoV that you've captured here and a photo which has generated so much dialogue!

@Steven: Thanks a lot for your participation to the whole discussion Stephen (for this image and the previous one I posted it again the day after just to let a little more people see and think about it). Thank U again*

I'm intrigued by the look on the young boys face - he like most little boys has a 'Boys Own' view on war. He feels empowered by being armed.